The percolation test is carrying on: 1 hr 55 minutes to drop sufficiently. That’s a blindingly fast rate of 1mm every 50 seconds or so. The average speed of a snail (Cornu aspersum) is 1.3 mm/s, and this is 0.2, or 6.5 times slower. The literature suggests a time of 24 seconds. Ha! Looks like we gotta kick the bejeezus out of Option B.

The guys have dug out masses from the deep trenches and have built up quite a Col de St Anne’s in the front. Rain is forecast, but I hope it’s not massively wet when the muckaway truck comes on Monday or they’ll need a few more trips to get rid of it. Not much more digging to go; just a couple of the garage walls.

The timelapse camera got some water in, so I’m missing a few days. I’ve got footage, but they’re not worth posting. The videos start off ok first thing, but as the unit heats up in the day, the water steams up, it stays in the housing and obscures the lens with fog. Not the best, but going forward we’ll squish one of those little silica packs in between the camera and the housing and we’ll see if that de-mists the whole contraption.

A two-droppper is NOT good when digging three metre deep foundations, and it really slung it last night. In fact, the guys dug out a deep section and shuttered it all up yesterday–all tickety-boo. But when they lifted the shuttering this morning to drop in the steels and pour concrete, the whole thing folded. Nic was unimpressed, and I can’t imagine Lee and his team were thrilled. After checking with Justin, the plan became digging at 45 degrees, shuttering, then backfilling.

It’s a real juggling act of mucking away the spoil in time for the concrete lorry to arrive and wedge itself in close to the trench. Nic has had one muckaway truck come when the concrete guys were pouring, and the driver was not happy because he had to wait around. But apart from that one time, Nic’s got it dialled and the system runs like clockwork.

The other fun bit today was thinking about the soakaway. All the rainwater is to run to a central pit filled with rocks under the middle of the garden. Sometimes these are called French drains. It’s a very simple and effective way of getting water into the ground. But you might ask: how big should it be? Well, there is a calculation for that which takes the predicted rainfall over a given area (roof) multiplied by some constants which gives a rough idea of the soakaway’s required volume. A more advanced way of calculating the volume is to check the draining capacity of the soil. To do this test they dig a small pit, fill it with water, and time the fall millimetre by millimetre. This is a percolation test, and that’s what Nic and Justin are comparing notes about. 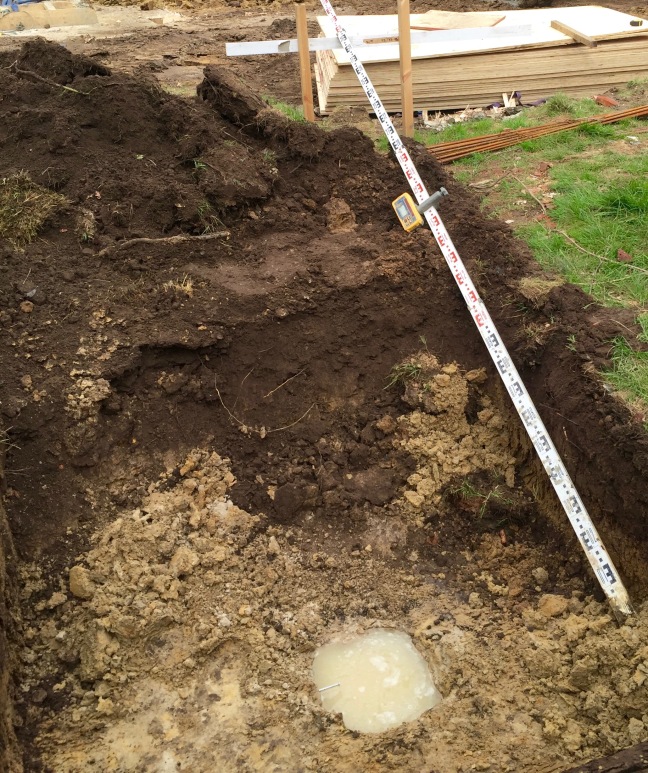 If the percolation test warrants an unfeasibly large soakaway, we’ll consider running the rainwater out into the ditch. Next door does it, so it should be fine. But these decisions need to be made before the blockwork goes up which will limit access for diggers and machinery to the rear drive.

Sunday is supposed to be a big day for rain, but next week looks dry. The brickies arrive on Wednesday, so we’ll finally be going upwards!

The last thing to show you is the test panel of bricks.

We think we can improve the colour and texture of the mortar. It looks a little too dark and a little too smooth. This might be just a drying thing as it changes colour a lot as it sets. We’ll try the last 20 bricks next week with a mix of lighter sand and a little aggregate. I stole one of my bricks (how does THAT work?) and a chunk of mortar that Justin prized off the back of the panel, and I’ll have a wander to a couple of similar builds to compare the bricks and pointing. I hope I don’t get arrested wandering around Oxshott with a brick in my hand. One vaguely interesting thing is that we’re using engineered bricks, and the original specification was for reclaimed London Stock. These are about a pound a brick with about 30% wastage. No, thank you! And they’re olde worlde imperial measurements which don’t jive with our modern metric drawings. But a comparison would set my mind at ease to make sure we’re on the right track from a design point of view.
Things like contracts, structural oak design, roof design, procurement and budget calculations are all happening in the background, but I won’t go into detail here. This project is a Big Deal, but not a Grand Design in the Kevin McCloud sense–we’re into low drama and minimised risk…and sleeping at night!

More digging, more mucking away, more concrete. That’s about it. Nic has been sending photos during the day which is excellent — thanks Nic! These are the small footings; the garage footings on the east side are deeper because of next door’s conifers and also because the floor is cantilevered off the back foundations. The idea is that although these will take a while to dig and fill, the first blockwork course before the DPC can start on the west side sections.