The walls of the house will be filled with this insulation. It’s foil backed and gets slotted in between the brick layers. Cozy!

The site has been so soggy that they’ve built a raft out of pallets for the brickies to stand on while they build. I think it’s a nice feature that we should consider in the landscaping….

The 6mm raked joints take a bit longer to build, but they look lovely in the sun. The bricks look more irregular than we thought which is exactly the style we’re after. The original-many-moons-ago spec called for reclaimed bricks, but they’re bonkers expensive and sized with imperial measurements! Ours were always a compromise, but it’s been a good one. I hope we make as good a decision with the roof tiles. The rainwater notches look great–can’t wait to see the plinth detail bring it to life.

Site meeting about 2:00 with Nic, Ben and Justin in our used-to-be-garage which actually makes a nice meeting room. Ben and I met Trevor the M&E guru. We sited boilers, gas spurs and foul drains and discussed the merits of separate manifolds for underfloor heating and towel rails. All good stuff. I’ve got some homework to do this weekend in making some final decisions before the floors are laid and the pipes are literally set in concrete (or below it anyway).

But my main homework is to sort the fireplace so we can tell the masons how big to build the hearth. I’m late and it’s not good!

Lucky 13–now that the awful weather has changed for 30 seconds, we’re seeing progress. The bricklayers have arrived!

The brickies will run the outer walls all the way around the building, then Lee and the ground-guys will lay the DPC. Clearly the DPC is VERY important given the events of last week. Then, I gather it’s all systems go for some serious vertical progress.

In the meantime, Grandma’s yellow rose is still hanging in there, and we’ve got another guest tonight. 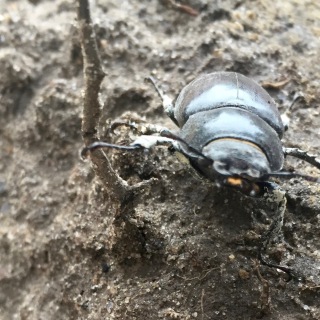