We’ve come a long way in this build….

The guys had a lot going on after the bank holiday: steels, cranes, personnel changes, rain. They’ve been steadily going upwards and we’ve been cracking on with decisions. We’re mostly there on bathrooms, kitchen, fireplace and roof tiles. We’re getting there on flooring and wall tiles.

The steels arrived on Wednesday. There are over 50 pieces in this build. There is a slight hiccup with the sizing of some pieces in manufacture, and after much checking some of them will need to be re-installed next Wednesday before the upper floor goes in. 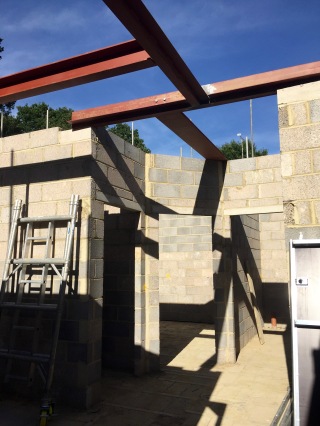 The overhang on the west side of the front elevation is coming along nicely, and the steel is placed on the piers to take the load for the upper brickwork.

The overhang on the west side of the house near the garage is larger and leaves a gap from windows to piers big enough to walk under. I’d better get on an plan the landscaping out the front in case we want some raised beds before it all gets paved over.

Roof tiles are very difficult to choose. We’ve spent some time looking through brochures and spent about a week developing a good mix of shades to make the whole project seem weathered–like it had been there for decades. When we presented our carefully considered combination to the builders, he said we were nuts. Why spend all that extra on something a) you won’t see, and b) will fade within a year? So we have decided on a single dark tile for the roof and another single reddish tile for the hanging bit on the west flank. Tick.