A visit to the joinery company that is doing the stairs, the oak subframes for the windows and the external doors.

Paul is our Area Manager and he’s always said to come on down and have a visit. As we’re getting to some crunch points with decisions, it sounded a great time to scoot to Andover to have a look. Today I got the chance to meet Gerald the MD, and he and Paul both took me for a tour of the factory before sitting down to talk design.

The factory is enormous. But it’s family run and has grown from a shed to a business with over 60 employees in a generation. There are 28 guys on the factory floor spread out into separate areas. There is a room for the initial cut as the laminated boards arrive from Germany, another for making tenons and mortice joints, another for windows, another for painting, another for stairs, and another for doors with CNCs, lathes, wrapped finished pieces and components all neatly placed in stacks per job. I’ve probably left out a few rooms,….but the guys were really busy as we went around, and everyone was really friendly and very patient with my picture-taking.

I was thrilled to see our job taking up (a large part of) the floor!


Laminates are used for the uncut beams so there won’t be any knots. They’re cut to section size on the outside dimensions, then they’re sliced on the remaining dimension to length, and finally, the mortice and tenon joints are cut in. Gerald fitted one of our subframes all up and assembled for me to have a look; the joints are seamless and the facing sides beautiful. There are over 70 windows in the house, and each requires more than four bits of wood to make the subframe. Some of the larger pieces, like the sills, are made of two pieces with an air gap in between them to let them bend and settle on installation (I think?!)

We’re having clear Osmo coated frames and doors to retain the natural look of the wood, but it was still awesome to see the painting room. The windows are suspended on a series of hooks strung up to a yellow motorised track. They trundle past the guys to get a good coat of paint (150 microns a layer) and continue on to the other side of the wall to dry. Water is spritzed in to keep the paint from drying too quickly, so the room feels slightly tropical. This waterbased paint takes about 1.5 hours to dry, but our clear Osmo will go on with a brush and take 3 days to cure entirely.


The stairs will be cut on a giant laser-guided CNC machine. I got to see a partially-build curved staircase made of gorgeous walnut; Paul had wanted to check the progress on it as he’d seen it the week before and it’s great to see these things evolve. Each piece for every job is drawn up, plugged into the computer and CNC’d to fit together perfectly. This particular job was gorgeous, and the whole operation is a real engineering marvel.

I’ve come away with some samples of different sized newell posts, a picture of cross sectional balustrades, two actual balusters to think about, and a lot of information about the front door from a discussion with Paul, Gerald, and Sean the Main Technical Manager. It’s going to be a busy weekend thinking through all this.

From Andover back to base, I had a chance to climb up the scaffold and have a look at the new bedrooms.

Back to Sussex we go!

Another breathtakingly gorgeous drive in the time machine to visit our oak structural frame. It gets loaded on Friday and will be onsite on Monday. I will miss this drive! Neil gave me a tour of the pieces, and in particular wanted to show me the showstopper piece he sourced for us. 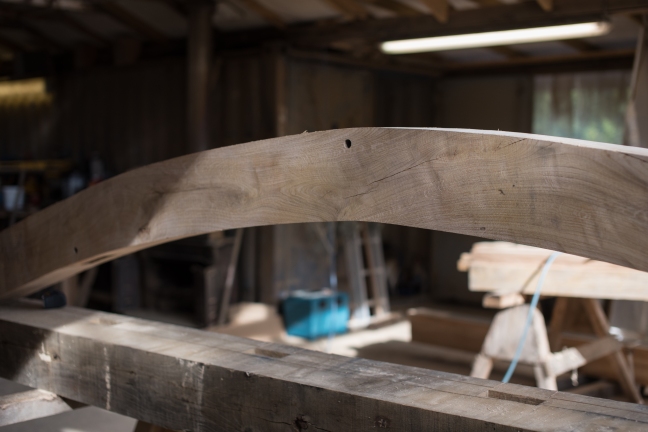 The single-piece curved beam is a success. 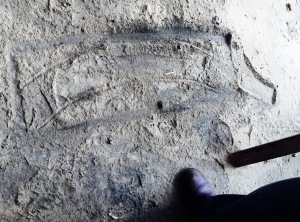 
There are over 60 pieces for the rear bay alone. They’ll be stuck on the back of a lorry over the weekend, then up to us on Monday early a.m. They’re all labelled (red pen for front and green pen for back), and it’s great to visualise where the bits will fit in according to Dave’s drawings.
It’s amazing how casual they are about taking these enormous beams and cutting chunks into them. They tell me that all the hard work, i.e. measuring and planning, has already been done, so this is the easy part. Very impressive!

On the way back, I put the anchors on as I passed the Bluebell Vineyard shop. A quick u-turn later and I was in the car park alongside a very Californian looking setup with tasting room and a nice few rows of well-tended vines. All was well, and then a great big tour bus from Eastbourne carrying a large number of pensioners arrived. I thought I might have just enough time to buy a bottle of their finest before they wandered in, but they were quick, and I was too late. My bottle of bubbles will have to wait until next time. And I think there just might be a next time because we’ve got designs on a nice countertop shelf for the basin in the downstairs WC. Back to Neil’s this autumn I think!


Paul the electrical guy was due to arrive, but he was stuck on the M25 unable to move. Apparently a crane (nothing to do with us!) blew up into a massive fireball on the M40, and travelling anywhere near London was a bit of a no-hoper today. We look forward to meeting Paul another day.

We also welcome Claire aboard the good ship St Anne’s. She’s designed an awesome kitchen, and she was onsite this afternoon to measure up and ensure that the drawings matched reality. Apparently this isn’t always the case, but on this job the plans and the build match decisively. She’ll now make up a set of drawings for review, right down to the lights, sockets and tiling. We’re looking forward to that!

Continuity–hooray! James is back onsite overseeing everything in his first pair of consecutive weeks in the job. Things are ticking along smoothly; but the brick team is running out of vertical interior walls to keep busy before the oak frame is installed next week.

We had a massive site meeting of the minds today: Dave the Architect, Tim the Contractor, Tom the Steels guy, Neil the oak guy, Paul the joinery guy, and of course James the Site Manager, Ben the Project Manager, and me tagging along trying to learn as much poss. Today’s lesson was: What’s a padstone? For those like me who have not a clue, these are extra strong blocks (not bricks) that the steel lintels sit on. Double doors require a steel above them to support the brickwork above, for instance. The brick team need to know the dimensions of the steels so they can set these padstones in the right places. Should be fine, right? They’re on the drawings. But if the steels are still somewhere between the drawings and physical arrival, the brick team usually waits until they’re onsite to line them up or they risk unbuilding what they’d already built off plan. And as luck would have it, this part of the project coincided with the engineer’s summer holiday plans, so we’ve been delayed in getting them even on paper. We’ve been playing the game of keeping the brick team onsite doing the interior blockwork when they’d really rather be getting on with setting the padstones and building the exterior walls. Next week, hopefully.

There was much discussion of how the oak frame will tie into the brick work. The frame is a really special thing–it’s meant to be completely self-supporting. As in, if you put it all together in the garden, it would stand up by itself. I totally respect the integrity of the structure and think it’s really important to have it do what it looks like its doing, and not pretend. A nice part of the build. We’re all looking forward to seeing it go up, so next Monday will be an exciting day.

There is a large A-shaped steel on the rear of the building between the oak frame and the brickwork that has yet to be finalised and manufactured, and this will be mainly to support the roof ridgeline. The roof is a very complicated thing, and although much of today’s meeting was spent discussing erecting the oak frame, Dave was on hand to make sure we don’t mess up the roof dimensions so that the pitch of steels matches the pitch of the oak once it’s up. Exactly. Tim wants to minimise the number of crane-days (too right, they’re bank), so it’s quite a job to line up the trades requiring cranes all on the same day/s. There are steels, oak frame and floor panels to juggle.

One decision that had to be made today concerned the bowed beam on the front porch. We’ve spent a lot of time trying to get the look of it right: how thick, where to place it front to back in the frame, what circumference the bend should be…. But just to make things interesting, Neil arrived today with an idea. He said that he’s very lucky in that he has the luxury of spending time (he’s been part of the job since February, so that’s a while!) sourcing pieces for his jobs from all over Europe, and that he had found the Perfect Beam for this job. The one he’s picked is bent at just the right angle across the whole of the piece so that the grain follows the bend beautifully, and the beam can therefore be made of one piece. Previous designs had two or three chops in it to achieve the right bend. Dave says the chopped approach would make the build look like a pub. St Anne’s Arms? Clearly the single piece is the better option. It will be slightly skinnier as a result of The Perfect Bend, and it will now match the width of the vertical beams between the windows rather than the chunky vertical corner pieces. I’m sure this will all make sense when it’s up, and I imagine it will look quite elegant.

Ben says it will be amusing to watch me give tours of the finished product. He reckons I’ll be waxing lyrical about the cunning oak-brick tie-ins and the effective placement of the cranked steels when really all they’ll really be interested in is the nice paintwork and some colourful vases. We’ll see if I will be able to contain myself….