I had the great pleasure of going to Aveqia in London to check out a demonstration of the new kitchen appliances. It’s a tiny venue specialising in cooking demonstrations for the corporate crowd. It’s only off of Blackfriars so I decided to walk from Waterloo. At one point during the morning I overheard that The Apprentice is doing an episode of some task or other at Aveqia very soon, so it’s clear that I’m hobnobbing with the aspiring-great and the aspiring-good. Of course, this is all in the name of research, right?

The morning starred Colin the rep who explained MC’ed and explained, and Roger the Michelin star chef who put the gear through its paces. We were treated to an incredibly special lunch cooked right before our eyes and I geeked right out on all the foody tech. Thanks, Claire for inviting me to go. It was fantastic! 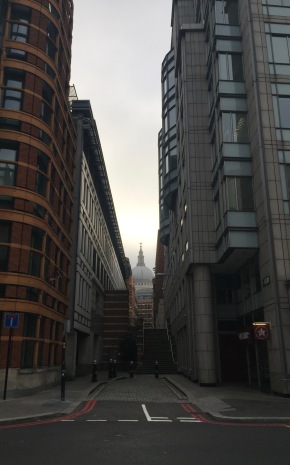 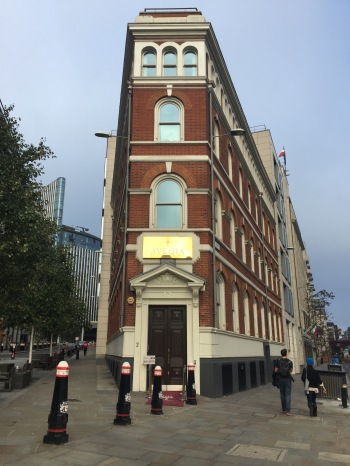 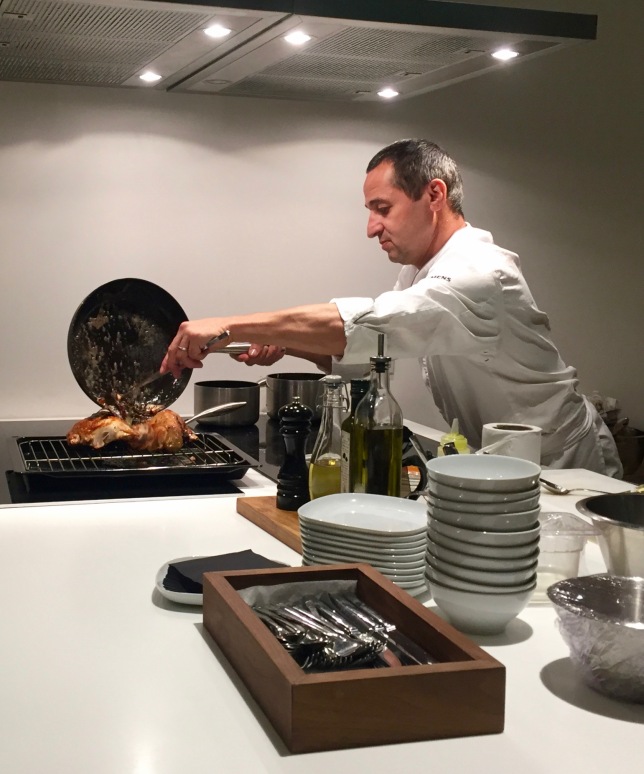 Back on site, the sun was out as well. The crane is back to lift the A-frame at the back of the house into its home alongside the oak and to fit the ridge beam that spans across the whole of the vaulted ceiling in the centre line of the house. The steels look a little forlorn on the ground and they’ll all be fitted this morning.

All my neighbours from all over the village can see our crane.

Mick and the guys have built the chimney. We are STILL dithering on the fireplace design so they haven’t installed the cowl on the very top yet because we might not need it.

Neil kindly brought up the beam he thought was onsite. It’s downstairs in the dry and will be installed next week. We’ve decided to change the design of the trusses over the front bedroom to allow for more storage space. This means a little unbuilding and a two week potential delay. It’s the loft storage issue. The rest of the areas will be boarded but between the trusses and up a little higher to allow a flat space between the angled pieces. The new area will be clear of the central vertical part of the truss: an Attic Truss if you know your trusses. There is a colossal number of moving parts to this project which isn’t helped by a fiddly roof partly made of oak, partly made with 56 steels and having undergone three redesigns. It’s amazing it’s there at all. Ben and Dave are working hard to coordinate manufacture and delivery of the new trusses before James finishes roofing the rest of the place and can finally tackle the east side of the house with the new trusses. We don’t want anyone bored on this job!

We’re also considering adding a line of tiles under each gable end to raise the roofline slightly as in the example of a different building alongside. Somewhere in one of the redesigns, the interior vaulted space came out a bit low so the beams in the oak frame now don’t show as much on the inside as we’d like. After all, we’ve spent a lot of time, effort and cash to get this oak frame right and we want to see it! In order to maintain the geometry and get the spacing right, the only way to go is up. There are a few options to do this but putting in a line of creasing tiles under the mortar on the gables might just be the way forward. Over to Dave to check, draw and sort, and we’ll decide which way to jump with it next week.

This weekend will be spent checking plans and choosing stuff, all the while keeping a keen eye on the budget. We have a knack of choosing the most expensive things going, and this is now coming into play a little to frequently. It’s definitely a case of champagne tastes with beer money. I’ve stopped telling suppliers that we live in Oxshott so they don’t make assumptions and get all footballers wives on me. But at least I wasn’t overly-enamoured with the £11k bathtub I saw in the in the window as the showpiece of the local posh bathroom shop in the village. Bonkers! So maybe it won’t be too bad on the final tally (yeah, and next week we’ll see pigs flying across the sky on the timelapse).