The roof continues to grow, ungrow and regrow. Dave and Terry spent some time last week discussing the design of the dormers, and as a result the first one they built had to be rebuilt. But Terry, James and Josh worked hard despite the drop in temperature and by the end of the week, they were all there despite the rain.

Part of the unbuilding included a set of trusses above the front bedroom. They were originally Palladian trusses, but this didn’t allow for storage. A little scratching of chins all round and we decided to switch to a cut truss. They arrived this week.

The solid oak subframes arrived onsite–hooray! They have one coat of oil, and the next will be applied in situ. James and the guys had to carry each one from the road into the dry by hand. There are 72. I can’t move ONE they’re so heavy. How they did it I’ve got no idea. There are three piles in the garage and two in the kitchen, and there they’ll wait until the lid is on the house. 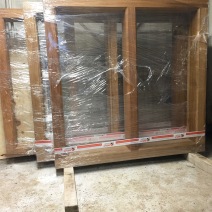 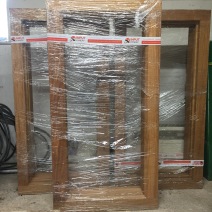