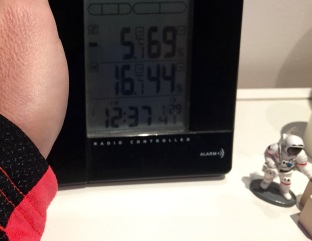 Mid-November and it’s getting really really cold. The rental house’s main valve to the ground floor radiators decided to give up the ghost this week just to make things interesting. Not quite a frost on the inside of the windows state of affairs, but it’s certainly cold underfoot when making that first cup of tea in the morning. But this is NOTHING compared to early dark-o’clock onsite.

Walking back from the station on Monday, we decided to pop in for a look at progress and found James and Terry accumulating questions in preparation for Dave’s visit on Thursday. Much scratching of heads ensued over the valley detail at the front and considering the fallout of whether we wanted a sloping ceiling in the front bedroom. The valley is covered with lead (remember climbing on the old roof of St Annes #1 armed with a broom and a jetwash to de-leaf the flat section of roof over the tower??), but the section is long and flat lead covering a space of more than 5′ tends to shrink.

Much to everyone’s relief, Dave came down to site on Thursday as part of his new and improved double-time for this job, and he and Terry figured out a way to ditch the long beam, sort out the lead, and start designing a flat ceiling for more storage in the front bedroom. After these tweaks, it’s full steam ahead with the roof.

Terry and Josh are putting up timbers for the battens to be attached next week. I can’t believe Josh is still in his shorts!! But I really like the combo of wooly hat on and legs out. They’ve been spending most of their time hand-cutting truss parts for the non-standard 50-degree angle roof and creating supports for the fiddly dormers. The game plan is to finish most of the dormers before James gets the more fun job of fitting the oak facias and stained soffits in their wake. Terry says the building will look transformed with these bits on. We’ll wait and see next week.

One of the details that we’ve signed up for is the kick out on the foot of the roof. It’s a little flare right at the end and kind of a Blair Imrie/Frank Chown style point.

Nice to see Mick, Johnny and Tom back to lay bricks that will live above the soffit. It will only take them a couple of days into next week to finish off. The wet mortar sits all around the kick boards. We’ve still got a pillar to build around the back, so maybe they’ll be back to do that when the garage roof is ready to go on. 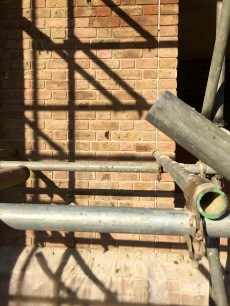 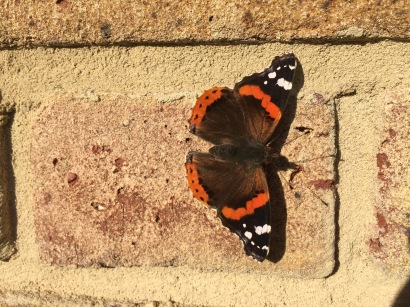 We’ve had a choice of resins to use for the brick slip panels in the oak frame. The warranty company wanted us to use this stuff instead of mortar to fix the bricks to the boards and also to point them up. The idea is to limit the possibility water ingress. A sensible solution and there is all of one singular company in the whole of the UK that does this kind of thing –just a little bit niche. We’re going with ‘natural’ instead of ‘buff’ or ‘chalk’. It’s not bad and looks the real deal.

I haven’t had the chance to bother James with my usual million onsite visits this week because most of work and the fact our house-time has been taken up with kitchens, tiles, stairs, wood floors, doors, sanitary ware and electricals. We’re also debating about whether to put sliding doors between the kitchen and family room. The main thing is that the normal double doors in the spec eat up a bunch of space when they get opened, so it limits the size of furniture for the room. I’ve started cutting scaled bits of paper to ‘furnish’ the room and test stuff out. Sketchup is great but it doesn’t give anyone else a chance to fiddle, so we’re going old-school. I’m sure there will be many evenings and much wine required to get this just right.

One day soon we’ll get around to thinking about landscaping. The hardest part of the plot to figure out is the bit on the north side of the house under the beech tree. We sadly cut down the cherry tree that we planted with such great hopes in 2000, so now there’s not much between us and next door except air. We’ll want to have something against the fence and preferably rising above it for privacy and to emphasise our house. There’s not much light or much water in the space which makes planting anything you want to keep alive problematic. Paving? Water feature? I’ve got to do some reading on suitable plants…. Allison, got any ideas?