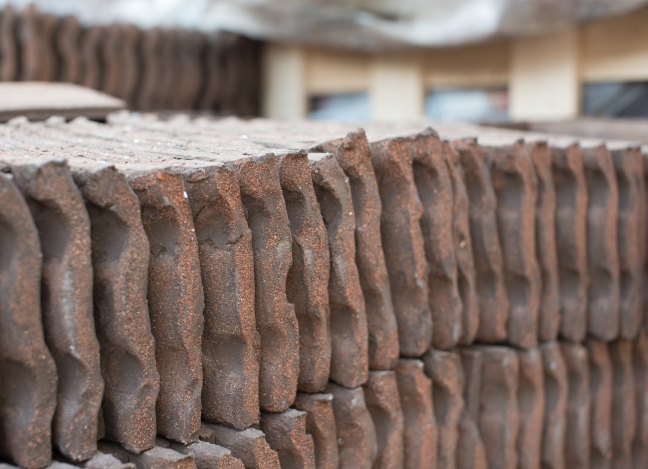 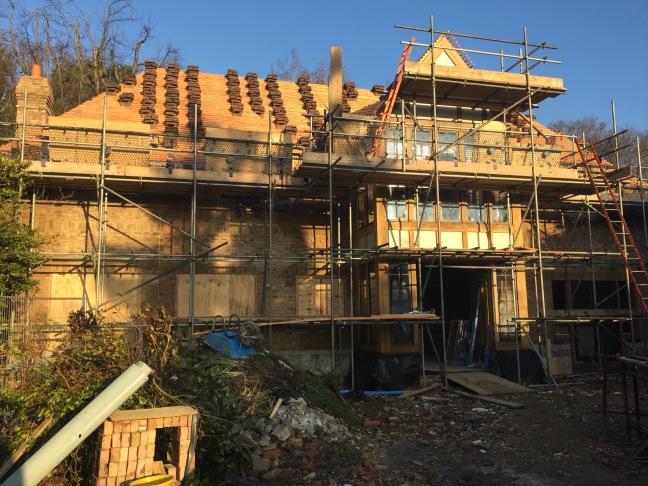 Roof tiles arrived this week. Spencer and his team used the tile-escalator, or Bumpa, to haul 10,000 tiles up to the roof. That is TEN THOUSAND. A totally bonkers number.

We’re very happy with the colour. Although we didn’t use a huge mix of colours in the end, having gone for mostly Heritage, Michelmersch, they still look really mottled when they’re on, and that’s the look we were going for. The colour changes a lot in the light, and it will darken over time. Josh, Terry and James are cutting up bits of insulation to fit in the rafters. Not a super fun task, but they’re getting on with it bravely. In fact, it’s their absolutely least favourite thing to do in the whole build because they’ve got to get all dolled up in their anti-dust gear complete with masks and as much full-length coverage as possible to avoid fibres sneaking into clothes and itching all to hell. And we’ve got tons of the stuff. Some of the long sections will have rolls of insulation, which gives a small respite, and these will be installed after the plasterboard ceilings are put up so they don’t drop down through the gaps.

Once the solid insulation is installed, they tack up large bits of fancy tin-foil to make it even cosier. A small issue percolated to the surface with lining up the glazing bars on the west and north faces in the front landing first floor bay. We’re still discussing how to deal with it. But the rest of the windows are going in nicely. 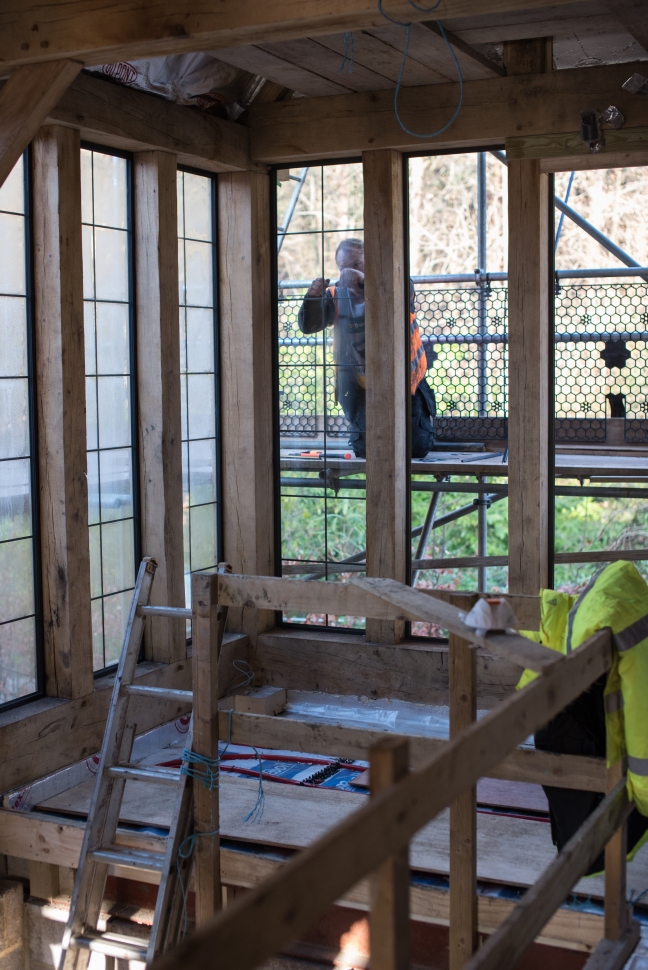 We’ve got another issue with the glazing bars in the back of the house too, and this is more of a design thing. They don’t line up either. But is it a problem at all? Architects would probably recoil in horror and shout “Of course!”, but this is a one off house, right? It’s the crack in the pot in the great grand scheme of things. Making them line up would require masses of redesign from the bricks to the subframes and on to replacing windows and frames. Tim reckons that once it’s decorated and furnished we won’t notice it so much. He’s probably right. My plan is to plant the heck out of the garden so you see through the windows (obvious but important here) into awesomeness.

The kitemarks were such a bugbear at the beginning of the build with the warranty company insisting that they were visible ON EVERY PANE. There are 98 panes. That was clearly not the option we wanted, and after many flurries of emails, we got them printed discretely just behind the glazing bars, just like the window company does on all their other jobs (that probably don’t use our warranty company).

It’s still below freezing but at least it’s sunny and as warm as it can be for the guys working on the back of the house. 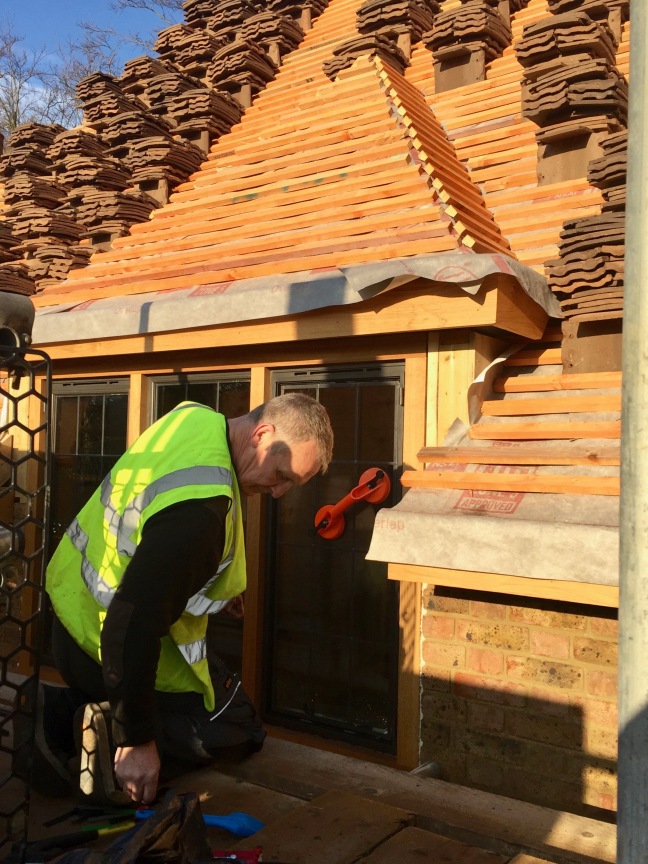 The view straight through the house is still pretty special.

It’s still been freezing every morning, so here’s a gratuitous picture of the frosty Common. 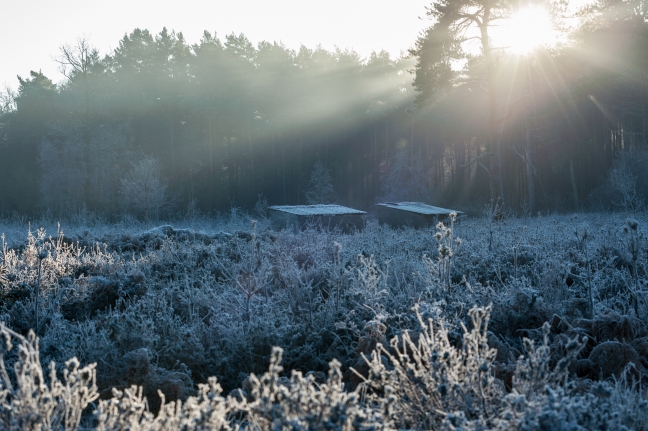 Before Christmas we had the pleasure of meeting Nick Archer, an artist in Rye who we’re going to commission to create a work for us on this wall. He’s done amazing large scale works with colour which is his speciality, and lots of his pieces are bought by corporations with large lobbies that can fit them. We’ve fallen in love with a particular piece of his below. We’ve even moved the electrics in this room so you see the painting from the kitchen instead of a black screen of tech. The painting will bring the whole downstairs together.

As a testament to the cracking-on vibe that is occurring onsite, the roofers and a window guy are onsite on Saturday. This doesn’t happen very often. Spencer and his team are enjoying a little winter sun and practicing their catching skills. I’m told they’ll even be around on Sunday to load more  tiles up to the roof–no cutting or noise to annoy the neighbours, just generally getting on.

There were 20 guys onsite on Wednesday, a world record for St Anne’s!, and around 15 for the rest of days in the week. Lots of juggling with cars, gear, deliveries and tea. 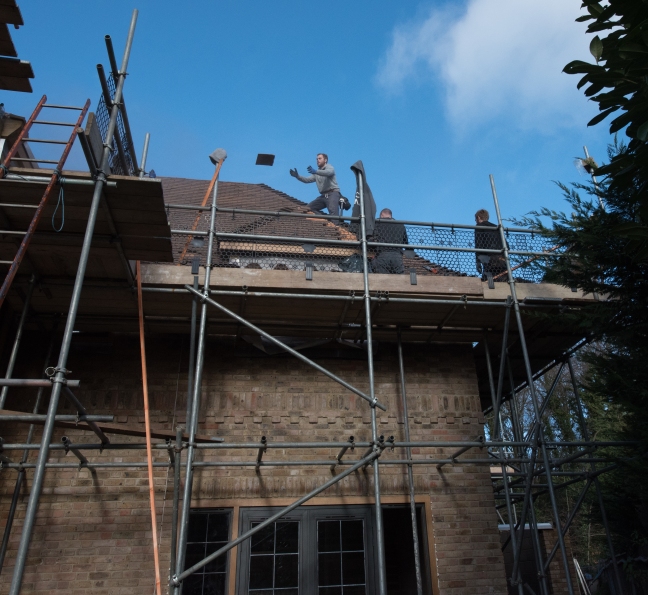 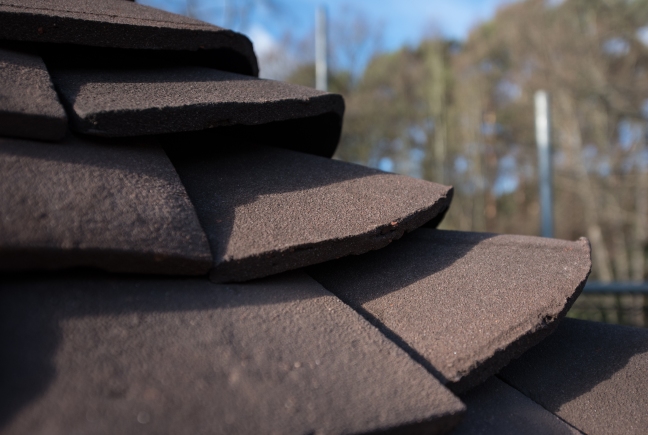 Inside is looking very different day by day with the addition of each window. We can start to set our minds to decorating this beast, and thinking of things like curtain returns and furniture. 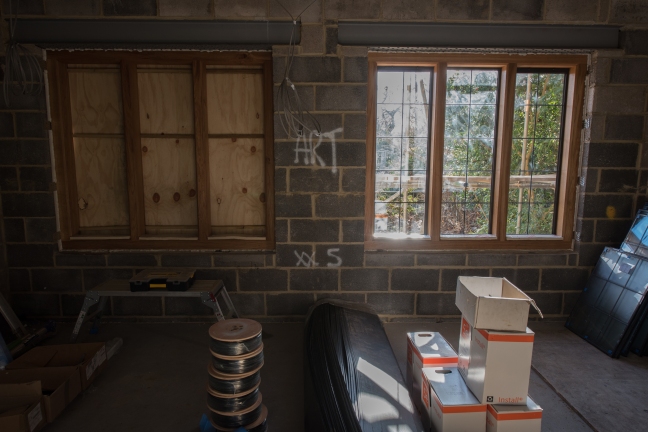 Some of the windows died en-route to their final destination which is sad considering all the love that goes into each one. But it must go with the territory and there’s only one dead soldier so far. 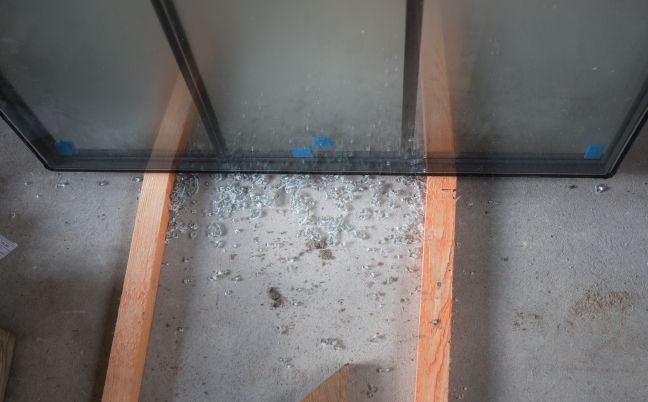 The pipework to bathrooms in the first floor has been installed on the ground floor ceilings throughout, and it pops through the floor when needs be.

One cool thing in the underfloor heating is the sensor setup. Tracks in the screed were avoided to install a sensor unit that fits between the pipes and connects to a programmable unit on the wall. This unit controls a zone, and there are units dotted around the house. Will be neat to use!

Another M&E thing we’ve got is a mechanical extract that runs from a central hub to each wet area and the coats closet with all the electrics in it. This unit will raise the circulation in the house so we don’t get condensation and then mould; part of building regs and calcs on the size of the building…. (?)

There was a debate early on about how to cross the vaulted area with the MEV pipes to the shower-room on the west side of the building. At the time we talked about possible fixes such as boxing it in around the apex of the master bedroom ceiling, or adding a second extractor fan for just that bathroom, and all sorts of complicated ideas–none of which were particularly enticing. But in the end James got the guys to run the pipework over the entire ceiling between one roofline and the other. Pretty impressive!

The photo with the silver MEV pipework shows the underside of the roof having been tiled, and the right side still to finish. You can see the lovely blue sky through the Tyvek  and battens on the unfinished side and more blue sky all along the ridgeline.

The front of the house upstairs is pretty dramatic. James and the guys continue to put up extra Tyvek and insulation whenever they can to protect it. These are the most precious windows ever! And it’s great to know that they think so too.

There is still a teensy bit of floor to left screed still because the team had brought just slightly too little gear with them last weekend. They come up from the south coast to do the work and they have to do it when the site is not overrun with subcontractors. They must have been horrified to find they’d come up short. They’ll come back soon, and it will be good to be finished to cover those delicate pipes.

The lone windows guy installed the side lights to the front door today. At least it’s a little warmer this morning on the north side for him. And the forecast is good going forward, so here’s hoping for a good few weeks with lots of activity!