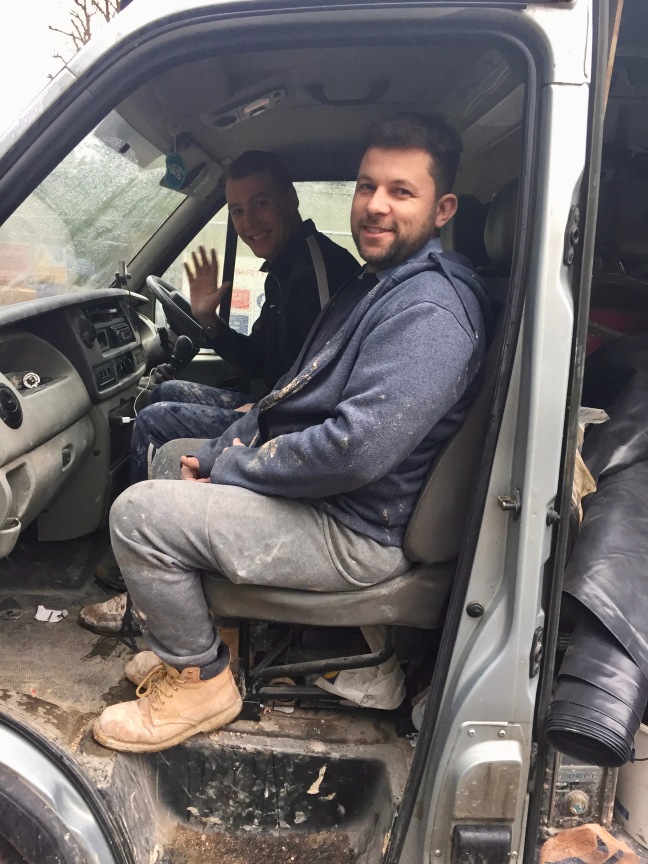 The roof is almost completely done. The colour is great, the guys are working hard–even on a Sunday, and the leadwork is gorgeous. The guys tell me there are loads of cuts which is slowing progress at this stage. You can hear them cutting from across the train tracks into the woods as we walk up to site. Most of the cut tiles are fitted all around the fiddly dormers that were built, needed a redesign from Dave, unbuilt, rebuilt, and now leaded and tiled. Loads of effort but they really make the building.

Tony has been busy experimenting with the curlicues on the balusters. He works out a listed building that has always been a forge since it was built in the 1400s , and he’s working in tandem with our joinery company that I visited back in Week 24. The joinery company works in the complete opposite way with a spotless factory full to the brim with machination, lasers and CNCs. You couldn’t get a pair of trades working more differently. And they’re both getting on famously! It would be nice to think that we’ve started a symbiotic relationship in stairmaking here.

The stair design is super complicated with three types of balusters, intricate oak interim newel posts, and all the other bits of the stairs like treads, goings, aprons, strings and nosings. It’s an artform. One of our decisions to make was about the thickness of the upstairs flooring: 15 mm or 20 mm? This had a massive implication for the staircase which has a 10-week leadtime. 5 mm! But it has a big effect on stairs. It was a job for Ben to coordinate all these overlapping decisions in the correct order so everything arrives on time. Not inconsequential, and I’m glad I’m not doing it (I couldn’t).

So I’ve had my sharpies out to ensure that everyone knows exactly where each type of item is going. This might sound pedantic, but it’s not a simple task to create this masterpiece when its taking two manufacturers, Ben to coordinate, Tim to purchase, and James onsite to make the whole thing work.  Ultimately it will be a really special part of the house. 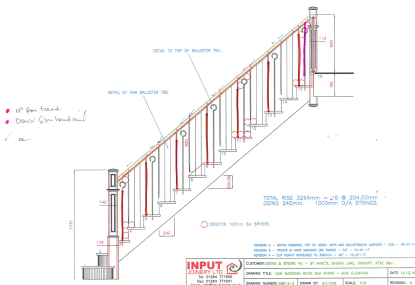 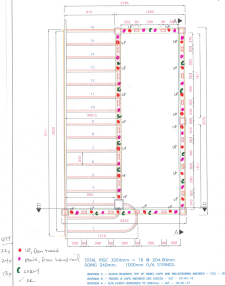 Another Big Thing going in is the bronze double doors to the back bay. They look great now, but I know that when the glass goes in and the lead lines don’t match, I’m going to really have to work on my non-cringe attitude towards it. But, …. it’s the way it is, it’s in the drawings, and we’re leaving it. But before all that happens, we’ve got to protect the casements, so the doors are drilled and fitted, and then they’re tucked away in the garage for safekeeping until the rest of the building is watertight or at least until the wet trades are out of the building. Access will be an issue too when these go in because we don’t want the whole of everyone to be opening and closing them all day long, nor do we want to have them propped open and potentially bashed into accidentally.

There are masses of guys onsite every day now, and parking is becoming an issue down our tiny little lane. Most of the neighbours have been super patient and we’re grateful for that. It’s only temporary! James even got his shears out to cut back some of the overgrown (we haven’t lived in the house for almost two years now so no-one has been around to do this) shrubbery across the way so that cars can pass more easily.

We’ve had MANY meetings about electrics. But a single team will be onsite now to finish the first fix. In hindsight, we should have been much more proactive in wiring this house from the start. We should have got sorted with lamps, circuits, control and all permutations of data and TV sockets that are going in, right down to the smoke alarms long before we put spade to earth.

One of the questions Paul asked today was what height do you want the doorbell? Well, what height SHOULD you put a doorbell? It was all down to Clinton pointing his finger at Paul’s shoulder through an imaginary doorbell and saying, “Here.” So the guys got their drill out and put it through the building at Paul’s shoulder-height. Effective, but bonkers.

The screed for the front floor was laid on Friday to set over the weekend. The guys moved the ladder to the other side so we all avoid the area until it’s rock-solid.

Meanwhile the plasterers are in the bedrooms making them look like, well, rooms. They covered up the windows with masses of really thick black tape and card to protect them. This is all well and good, but the house is now completely dark. They’ve brought in masses of lights to help, and these are good because they highlight every imperfection. Clearly, there aren’t many imperfections when they’re done. They’re a totally jolly team which is amazing considering it’s totally hard and messy work. They’ll be in over the weekend (which is awesome) so that it goes off in time for Monday and all the chaos that ensues for next week.

It’s lovely to just walk around and see what’s changed from day to day–even down to where they put stuff. I think that we’ll be using the house in much the same way as they do; they’re putting their gear out of high traffic areas, just like we’ll be doing when we move in. I’m taking notes….