What started as excitement seeing the marble arrive quickly turned into frustration at seeing 50% of the slabs chipped around the edges. They’ve all gone back to base which is a shame.

Lots of work done outside this week now that the scaffold is down. The gas installation requires three separate services: one to connect to the street, our guys to dig the trench, the same installation guys to return and connect, and the last bunch is the guys from the supplier to install the meter.

After spending an hour on the phone with the supplier trying to untangle the previous contractor’s paperwork, I discovered that they still had our gas “on” as “live”. This is weird because it’s been capped off for two years with a suitable daily standing charge applied. Hello, refund?! Once they got past that little idea, the next job was to line up their team to come out and swap the meter. This is great because upgrading to a smart meter at no charge is awesome, except… there was no old meter to collect. The previous meter has gone walkies, and the only way to proceed with the swap was to declare the old one “stolen”. You might think there a difference between lost and stolen, but not to the gas board. Their drop-down list only had stolen as a sub-option to missing, so I sheepishly called the police to get a crime number so I could report back to the gas people to complete their form. The short story and a very depleted phone later, is that the connection is due for Friday next week.

We’re having the electrics upgraded from single to three phase which will provide enough for growth if we ever decide to launch rockets from the garden or at least have power to a shed or an electric car quick-charger on the drive. This connection requires coordination between the power network installers who will do the work in a morning and the supplier who will install the meter in the same afternoon. The hidden subtext to this is that this has to be coordinated because while the sparks guys are onsite, the electricity is turned off in the street…. FOR THE WHOLE ROAD. So we’ll be popular then. Hopefully this will happen during Easter break when loads of people are away.

The downpipe drains have been dug out too, and they all lead to the soakaway in the back and the ditch in the front.

Terry and Josh are working hard on the garage to get it done before the roofers arrive next week. They’ll also need to finish scalloping the lead in the upstairs windows which they can now reach without the scaffold in the way. And they’ll finally tile hang the front of the house.

I’ll give you a little tour now that the plasterers are almost finished. 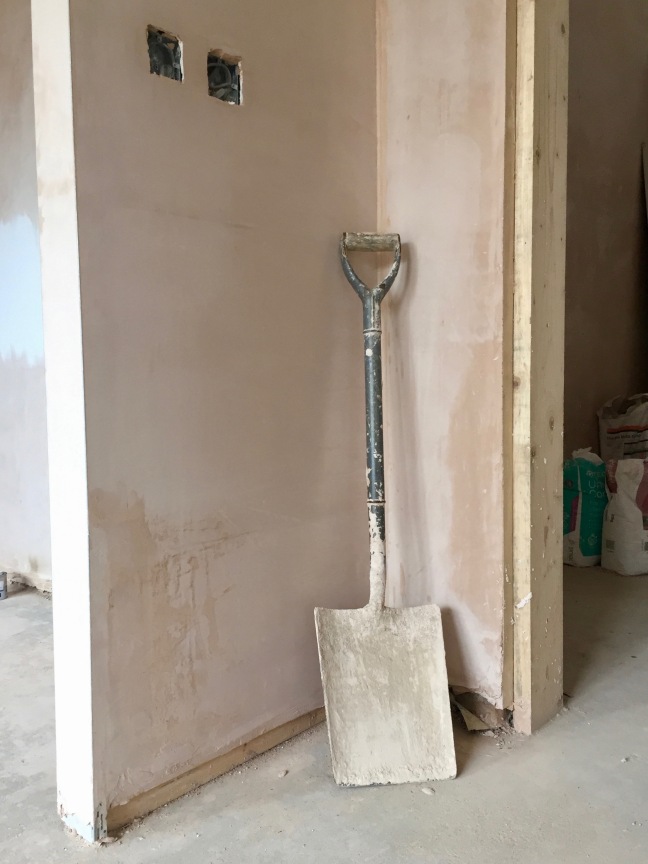 Clive has been applying the mist (under-) coat, and James has been putting up the architrave and skirting.

The last panel of plaster in the single-skinned flank of the upstairs gallery has been approved by the warranty company, so it’s ready for its mist coat too.

This week was decision week: ironmongery, paint colours, stone for outside, stone for inside, fireplace, joinery. And I haven’t even started on the wardrobes yet. So, armed with an armful of colour charts, I went to buy some sample pots which Clive kindly offered to put up last thing on Friday. We quite like the Polish Pebble, even through it’s really Polished Pebble, but the guy at the shop mis-heard me so now it’s paint from the eastern bloc. I was picturing going to a decorator place, or B&Q at least, and choosing a nail-polish sized pot of paint to take home. But it doesn’t work like that. You need to choose a shop with a Dulux mixing machine where you tell them what colour you’re after, they type it into the machine, and it adds the exact amount of pigment to the base. I bit of a shake, and voila!, you’ve got your tester pot. 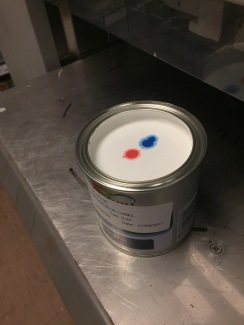 But the final colour can’t really be chosen without considering Nick’s painting. He’s the colour expert, and I’m very much not. The work isn’t not done yet, and won’t be for another month or so. So a quick visit down to rainy Rye to see him for a painting check-up, a cup of tea and a chat helped to narrow the field, and we’re pretty much there now on the ground floor. The pressure is on to make a good decision before we keep the decorators waiting and set the project back by dithering.

I thought I’d take advantage of the journey that passed such amazing countryside, so I stopped at Leeds Castle to see if I could have a gawp and grab a sandwich on the return trip. I am so used to the National Trust that I just assumed I could grub and go easily. Maybe I’m just naive (well, definitely), but I was surprised to see that it cost just to go in. This clearly wasn’t the National Trust. Not even a coffee shop at the gate. I thought I’d treat myself and stump up for the entrance fee, but quickly put the brakes on when I could finally make out the charges on the board. What’s the maximum price you’d pay for just a peek at the castle where Henry VIII used as a residence for Catherine of Aragon before that all went south, a ham sandwich and a coffee? £5? £10? Well, the entrance fee is a whopping £24.50! Needless to say, my M&S wrap from the service station around the corner was smugly nice, and cheap.