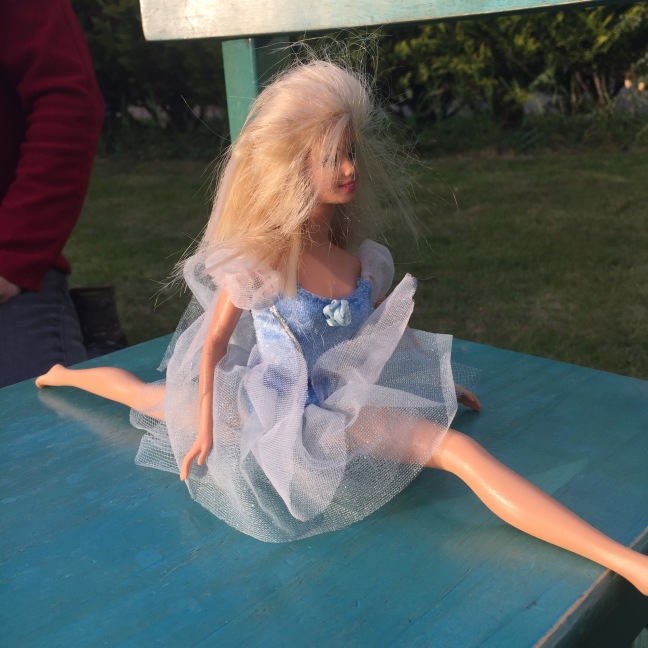 It’s official: we’ve Given Notice on our rental house. This event sparked a flurry of activity in the household. Given that we’ve moved out of the old house in the first place (after 15 years of living there–there should be a law that people are forced to move every five years in an effort to decouple themselves from years of rubbish that “is perfect for car-booting” or “I’ll save for the grandkids” (grandkids?? OMG what am I thinking?)), then to the first rental for 7 months and now to this one for what will have been the last year and half by the time we move again, there is no way on god’s green earth that I will cart around (and pay to be moved) old hosepipes, used bunk beds, boxes of duplo and out-dated TVs a fourth time. This just will not happen. The only thing for it was to get the kids on board and take everything out of the garage for a well-needed sort out.

I have to admit that by later afternoon when we decided to ebay the barbie dolls one at a time, I kind of lost the plot.

barbies can make you crazy

The biggest event this week was the stairs. After Clive and Mike thoroughly Osmo-ed all the individual parts, they handed over to Josh, Terry, and James to gingerly squeeze them into the hallway. There were a few headaches along the way such as design of the last newell in the SW corner. It fits so that the corner of the wall is in the middle of the newell making it appear to kind of wrap around the wall. 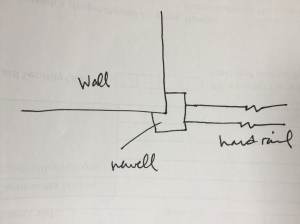 I’m not sure where the communication gap lay, because it never even hit my radar until I saw Colin onsite, but the post was delivered as if it were flush with the wall thereby leaving an exposed unfinished edge into the hallway. When the guys rang Colin at the joinery company around midday to ask what to do, I kid you not, Colin hopped in his car, zoomed up to site straight from  their base in ANDOVER! and sorted the problem immediately. I cannot believe he dropped everything so fast and made the solution happen. Terry says the new newell will be here early next week. This jaw-dropping effort, coupled with the effort made to give Tony the blacksmith scale drawings and meeting with him at his forge, have made the job a complete pleasure. Colin–you’re a rock star!

How much do you think a solid oak staircase weighs? Clearly less than four guys can lift on a random afternoon in April.

More bits were added as the week went on. You can see the long aprons that cover up the first floor buildup being installed at the end of the week on the time-lapse. Handrails, newells, starting steps, nosings, stringers…. stairs are a very esoteric thing when you consider all the measured parts. The guys have labelled each with a Sharpie on the edges to help so that they get installed correctly and to limit the chance of some going walkies. The fancy secondary newells are due onsite soon, and Tony will be back to fit the balusters around the middle of May.

Taking any chance to visit the forge again and see how Tony was getting on with the balusters, I was off like a shot on Tuesday to approve paint. All the parts are finished, and they’re ready for powder coating. I still have reservations about powder coating in principle, because it’s not the natural metal finish we were originally after. But solid bronze balusters would completely break the budget and steel would rust, so neither were ever a real option. With bronze, we would never have had the pleasure meeting Tony and learning about metalwork. The colour he’s chosen is a kind of off-black with tiny flecks in, and it’s more of a satin finish than a gloss. I’m sure it will be amazing. 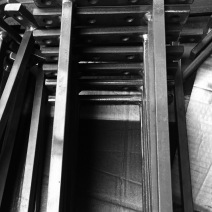 It does feel like the space has shrunk in some ways, but since stairs give the house a backbone, it feels in other ways like they’ve always been there. Shame to see Terry’s temporary banister taken down! 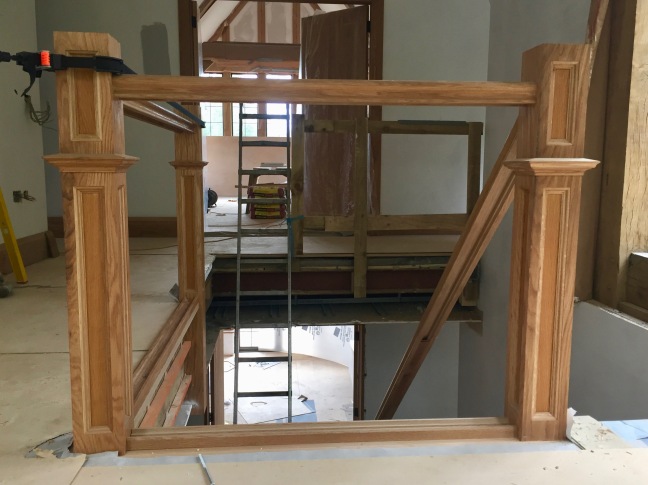 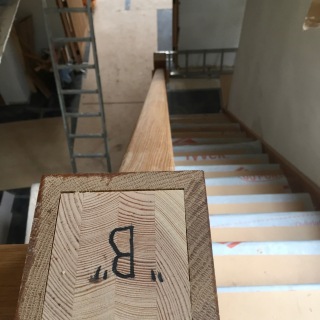 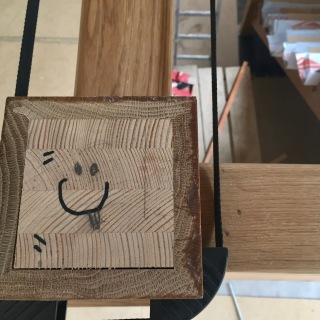 Clive and Mike have been painting things and they are concentrating on bedrooms. I haven’t gone into too much detail of how we ultimately chose these colours, but we found that it’s much easier to knock out what you don’t like than it is to choose what you do like. All the rooms are Marble White with trim in one of the darker shades on the Dulux Trade range. No Farrow & Ball here–they want £195 just to have a conversation, so we’re DIY-ing again like the lights. Mike calls each room by its shade: Mineral Haze, Quartz Flint (or whatever it is, clearly not enough headspace devoted to decoration, note to self, perhaps saving that £195 was a mistake…..), and I call them by the kid who will live there: Gemma, Gareth etc. They’ve pretty much finished Gemma’s bedroom and it will be great to see the others come to life as they work their way around the house.

When choosing the skirting last year, we had a devil of a time working out which profile to use in the bedrooms. We wanted to save a bit of cash and make a decorative statement by using painted skirting, but we couldn’t find a profile we liked. After much costing and quoting (sorry, Tim!), we threw our hands in the air and found a company to make the same lambs-tongue profile as downstairs but in softwood. More expensive than off-the-shelf, but less than solid oak. It’s great to see them in, and amazing to see them painted at long last. I just hope it doesn’t look too twee or artificial in paint. The window subframes and the cills remain oak, and of course, the flooring is oak, so it should be a good balance in theory.

Other random bits of the week include finishing off the hallways with skirting and architrave. 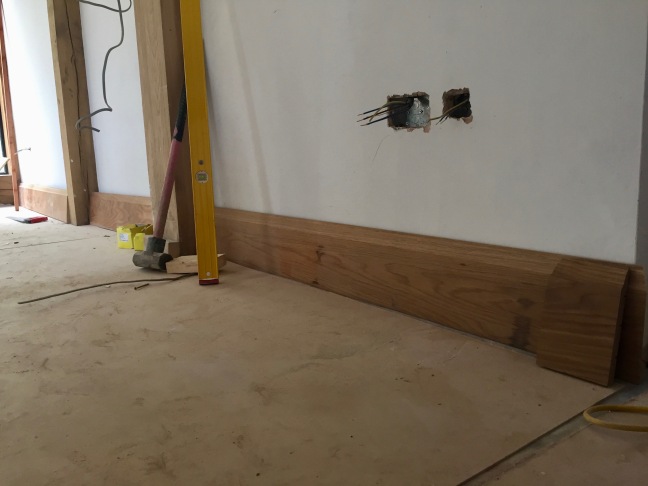 And the WC buildup on the back plinth  magicked itself into completion. The drawing is actually with Dave, but James figured it was a simple amendment to make the cill and the top of the buildout be the same level, so he predicted where the additional boarding would go, and just built it. Looks fine to me.

The tilers have been beavering away in the upstairs bathrooms. This meant choosing the final position for the lights and mirrors so they can drill the electrics through the tiles. And of course, we have no idea what these mirrors or lights are yet, and less of an idea of committing to their location. Awesome planning on our parts as usual. Not. So double-quick to the internet and my graphics package to sketch out what was required. I think I’ve got it under control, but buying these things is pretty complicated as well because as this was our first foray into Fancy Stuff For The House and not just lumber and bricks, I wasn’t quite sure how the purchasing stream worked. As an exercise, it was good to get these things solid and communicated well to all parts of the team so everyone knows what to expect. In fact this whole buying thing sat alongside a review and future purchase of the electrical fittings which was interesting and time-consuming, but also rewarding because it’s forced me to know exactly what light goes where right down to the temperature colour and flange finish. This is a convoluted way of saying that although the tiling looks great, the work going on behind the scenes has been hectic.

I met Kevin onsite on Monday, and the guys have been putting up tiles steadily all week. By Friday they’d almost finished two bathrooms. By next week, it might just be most of the way there.

Artur finished off fitting the kitchen and utility and left us this week, and handed over to Jason the marble guy who spent an afternoon templating the worktops. It will take about a week at least before they’re installed. We discussed in massive detail locations for the cuts for the hob and downdraft extractor, and it all hinged around fitting the ducting that runs from the extract, through its remote motor and out to the wall. The ducting quotes we got through originally were quite high, so I naturally tried sourcing it myself. Firstly understanding the function of each component and then finding a guy who would take the project (and my naivety) on board were interesting enough, but when it came to actually looking at the space onsite and taking responsibility for the spot where the colossal 200 mm diameter hole that’s going to be cut out of the brickwork for this part of the kitchen installation will be, I completely lost my nerve and quickly came to realise I was totally out of my depth. So I promptly handed this part back to Claire at the kitchen company. She was entirely professional and diplomatic, I would have been seething at some dippy client putting my project back a week, but it is now rather a hot potato as timing is an issue; the motor and its ducting are dropped in before the worktop is installed, so unless the gear arrives double quick, it might indeed hold up this part of the supply chain.  Full marks for enthusiasm on my part, nil for effectiveness.