The kitchen is in. 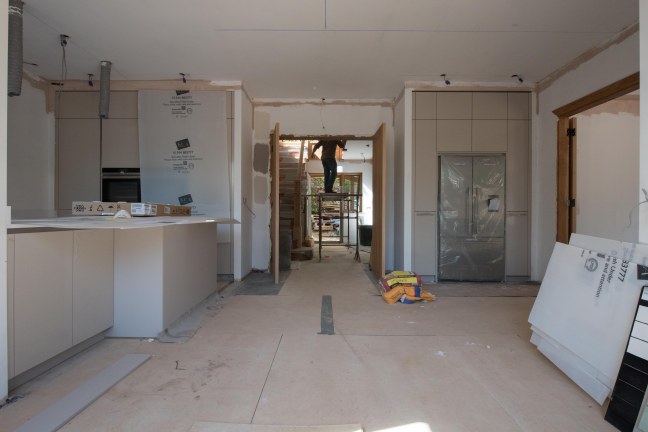 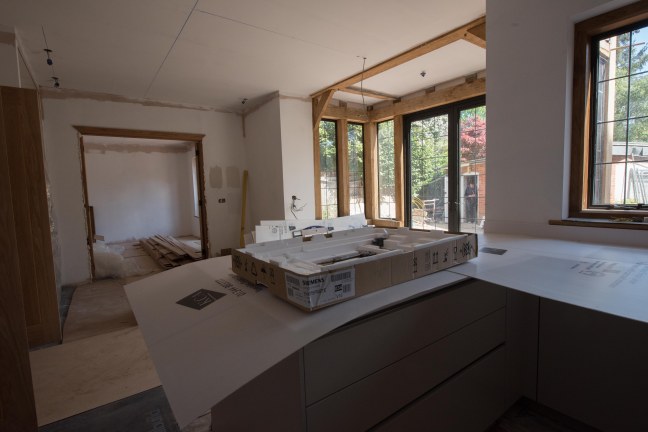 There are a few teething problems, but I’m sure it’s nothing that won’t be overcome in time. The most imperative thing that needs a little attention is the presence of the hole that’s been drilled for the ducting. James had organised a massive 7″ core drill to be onsite for the job, but the work that was carried out didn’t use that tool, so we’ve got a preliminary hole for the moment. This will have a lovely grille over the front of it in a couple of weeks, and eventually it will be covered by hydrangea or otherwise. But for now, we don’t want any little beasties crawling in and making a home before we do.

Terry and Josh have been working hard on the stairs. There is an incredible amount of chipping, gluing, measuring and fitting involved. And inherently, there is a lot of up and down, up and down, so it must be tiring. The bottom steps were set into place and they look ever so graceful. We can actually use the stairs now, but they’re still covered up with protection, and I think James will keep the ladder up as long as possible to prevent boots from risking accidental chamfering off of the square nosings. It’s interesting to see the scaffolding morph into different positions as required during a working day.

The fiddly CNC’d secondary newel posts arrived as well, and Mike and Clive have covered them in a lovely coat of their favourite, Osmo. They look a bit lonely off the stairs, but they look great in the pdf files–can’t wait to see them go in.

Some of the floor on the landing doesn’t quite meet up with the oak. It is extremely difficult to foresee these join details in planning the house, and lots of these things will emerge in the coming weeks as we race towards the finish line. So today’s decision was to choose a wood detail to act as a mini-skirting. We could have a full-height skirting just like the rest of the house. Or, we could fit a cut-down bit of architrave of the same profile as the rest of the house, or even a tiny bull-nose piece of oak that joins the floor and the beam. Since the structural oak remains the most substantial feature of the build, and the goal is to expose as much of it as possible, we’ve gone ahead and chosen the bull-nose, but as low as possible so we don’t have to chop the dowels, and as thin as possible so it doesn’t look silly.

More site meetings, more baking. Ben’s been very patient with us over the time it takes to make these little decisions. Hopefully by the end of the project we’ll get the process dialled and each one won’t take so long. But for now, seeing bits and pieces in situ helps a lot, and sometimes this means climbing up ladders and holding bits of wood up to see how they look!

We finally bit the bullet and removed the oak collar on the clad sections in the master bedroom. Hands in the air, we fully admit to being over-enthusiastic with Neil when we designed the piece. Although the king-post and curved webs were awesomely built, and Terry, Josh and James spent a week installing it, we felt adding them was a decision made in haste so we asked them to take it down. I’m more than a little embarrassed about this decision, but it had to be done. Now it feels like we can breathe in the room.

The guys initially thought they’d have to take down a load of plasterboard and really fight with the screws that held the cladding to the oak. But in the end, they managed to cut the insulation and plasterboard in a nice straight line along some temporary battens put up temporarily alongside the cladding, and the oak was drilled out with a minimum of destruction. Very impressive. We now have to hang fire until Neil can manufacture the new cladding and get it to site. This stuff will be slightly thicker so it meets in the middle thereby covering up the central steel beam.

The sun is swinging around towards the front of the house during the day, and it belts in through the front bay in the afternoons making all sorts of lovely shadows and lines. 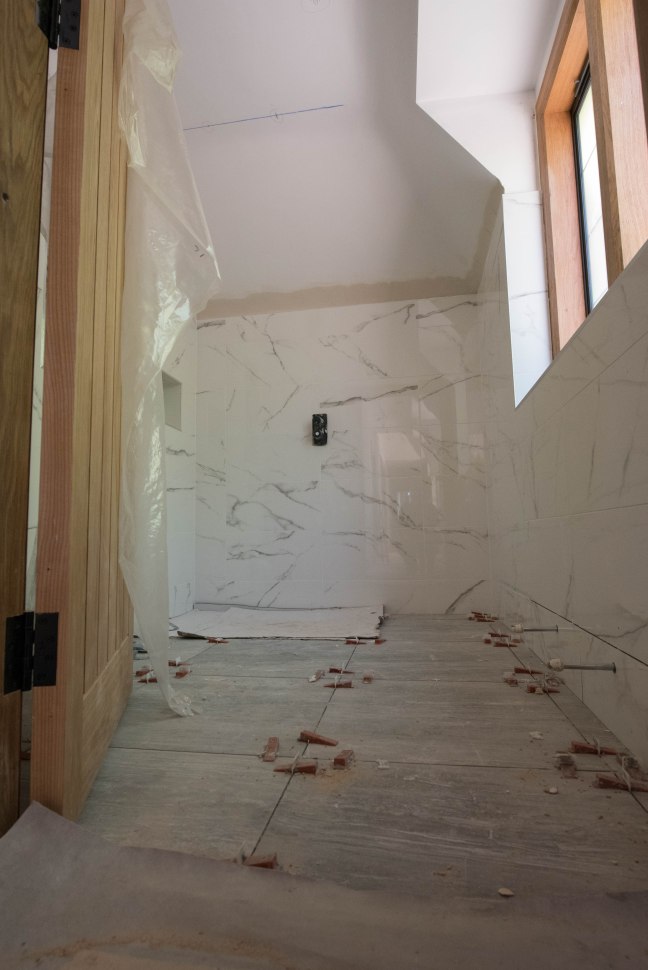 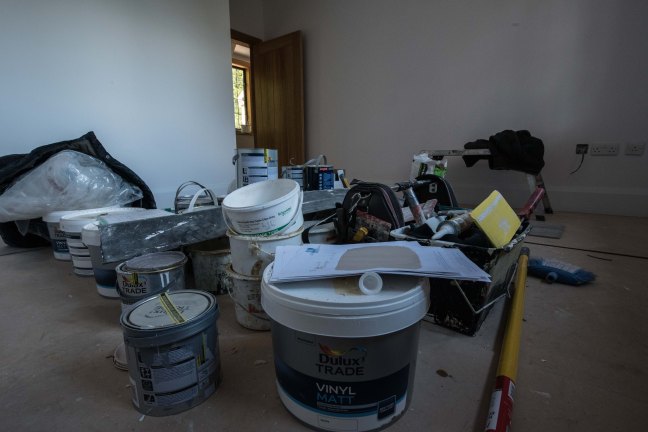 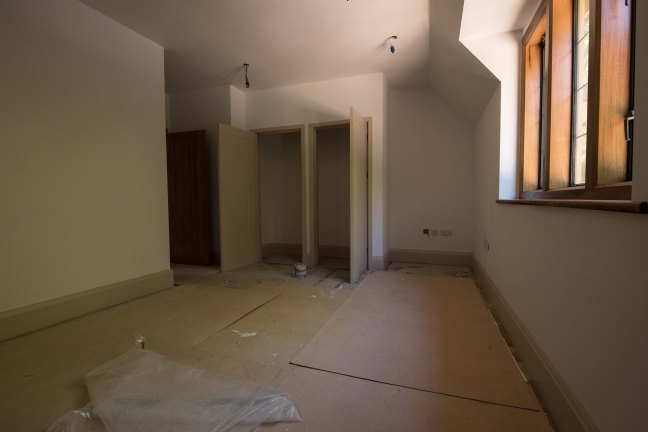 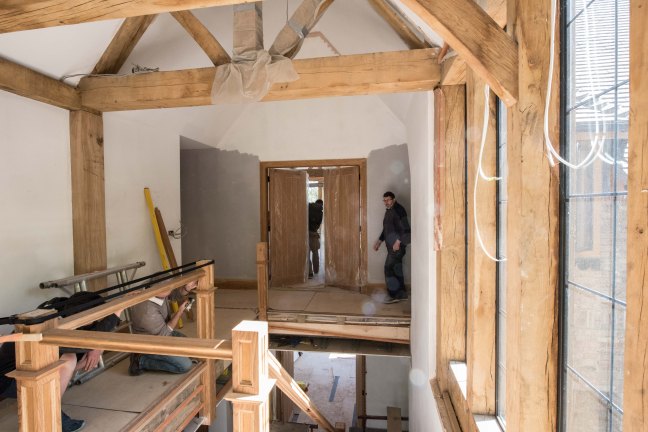 Next week will see the groundworkers returning. They’ll start on the patio around the back, and they’ll swing up to the side of the house before they hit the front. Then it’s the all-important bridges. Tony the structural engineer is putting the finishing touches on the design before issuing instructions to Tim and his team. The goal at the moment is to devote resources to the interior as much as possible and leave the drive until last.

Tim had the club tiles moved up another rung this week. It’s a tiny little detail, and it took a lot of effort to move everything up just one course, but we’re very grateful and it looks great–thanks, Tim!

We finished the week with a trip to Rye to visit Nick and see how the painting is coming on. He’s so accommodating and patient with our numpty questions, making us cups of tea, even talking about Gillian about her GCSE final piece and taking us for a tour of Rye Creative. It’s lovely to see the painting again and to have a little bit of input into the work. Gillian and Matt joined us, and after a lovely lunch at The Globe, we spent the afternoon wandering around Rye Harbour, dodging waves, looking for jellies and doing a spot of geocaching. The weather closed in near the end, and it was great to finally see Rye in a bit of sun for a while as in all the previous times I’ve been down there, I’ve been treated to a bit of horizontal rain and lashing gales.