Deep breath. Another week. Lots happening onsite though. I’m thinking Pareto thoughts as we get into the last 20% and see lots and lots of little tiny things blossoming into Good Things and other parts turning into Snagging Things.

It’s all about stairs at the moment. The last newel came to site, and got chipped into the corner.

And the last baluster went in with the weird expanding foamy glue.

Tony brought the long-awaited balusters to site on Tuesday. They looked a treat when he got them out of the van and laid them out carefully in the family room.

He’s rightly proud of them and set them out with enough room between them so they didn’t touch each other. We anticipated a smooth installation, and Tony brought Dave along to help. But when everyone was onsite and we all tried to negotiate Tony’s metal work with Terry’s wood work, James quickly realised that because stairs are installed sequentially, our plan to add Metal and Wood in parallel wasn’t going to work. Tony usually operates as a discrete trade that doesn’t rely on anything else going on after his work is installed, so when we decided that to avoid a lot of standing around and waiting while wood and capping were placed in line after each baluster, we all decided it was best that Terry install the whole thing, and Tony left, a little disappointed.

The pattern is kind of complicated and made more so by having mirrored patterns along primary newels while retaining a consistent direction for the pig-tails (what Josh calls them). One small bit of trouble bubbled up upon inspecting the holes cut for the pointy-ups and curlicues. They’d CNC’d into the treads at the joinery base, but they were rounded, too small, and bereft of further drilling into the stringers. The holes were short so the lengths that Tony cut perfectly to size couldn’t be fit. Another reason that Tony went home early from the party.

This was potentially a bigger problem than working out the process of labour in the installation. The holes are meant to be square to accommodate the metal sections, and drills are generally round, so straightforward drilling out wasn’t an option. Could chip them in with a chisel?  In order to get the chippings out of the hole and keep a square profile there’d be no way to get a chisel down in there at the right angle to do the work. Much chin scratching and tutting all morning. Luckily, the joinery company sent down a lucky victim later in the week with a portable mortice chisel machine to sort it all out, and once that was done, Terry and Josh could get fitting, working their way gradually around the balustrade.

More chin scratching occurred when we realised that a couple of the rails pointed the curlicues in the wrong direction. But that was quickly sorted. Between Terry and Tony, it was only me that was panicking for no reason at all. 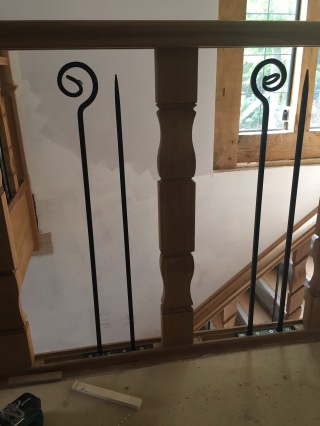 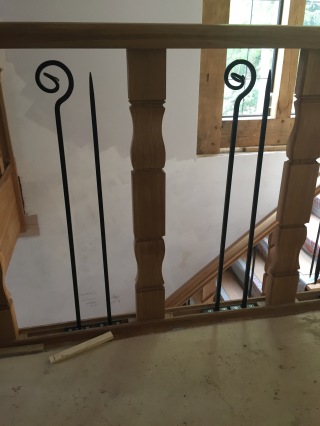 Decorating continues on a pace. I read somewhere that when they’re midflow, it’s important to hold your nerve, make no changes, and see what the colour looks like when they’re done. I must admit to having to do just that at a few moments while Mike has had the brushes out. None of the colours are particularly contentious, all different shades of neutral. But I’m used to seeing all the walls in white, and some of the colours seem a bit, well, bold in large scale.

The guys are putting in all the door handles as well. Graham has been very patient with our list of door furniture, and it’s incredible how many working parts and variations there are to doors. Bathrooms sets, locks, latches, flush bolts, roller catches, magnetic catches, exterior espag sets. And I still haven’t chosen a front door knob or a post box.

There is a lot of dippy stuff going on behind the scenes to do with bathroom fittings. The WC basin is a freestanding floor thing, and fitting it is giving the guys kittens just because it’s a little unusal. How far from the wall, madam? How high for the taps? It’s almost in, and the water is live. They still have to tile the back of the room before installing completely, and that will be next week sometime.

Another problem was bath valves. Valves are the things that turn the water on in plumber-lingo, and we’d planned to have them drilled into the bath. But of course what’s on the architect plans didn’t quite match up with the bathroom order that we placed last October, and the holes had gone off into the ether. The logical alternative was to fit them on part of the horizontal buildout from the bath to the wall.  And this looked alright until we remembered the vanity unit that would stand between the user and the dials. So I thought, let’s just cut to the chase: I recalled what Dan had said about controls when we started talking about bathroom gear in the first place, and I opted for a simple manual shower valve for the bath. Martin was as great about it as he’s been since he’d picked up our job after Dan had left the company, and he did a straight swap that included two drives to Farnham (mine) to return and collect.

I don’t have any photos of this gear, but it’s really simple. In fact, it’s so simple that Trevor and Dave on the M&E side said that it wouldn’t pass building regs. Apparently there’s a pesky TMV3 (?) regulation that these valves do indeed need to be thermostatic and not manual so little-‘uns doesn’t get scalded. This whole bath tap thing has been a very long and boring saga which has included me looking for options on the internet on my phone in tiny-vision in meetings and in the middle of the garden trying to make a decision about taps that would work.

So instead of photos of bath taps and Surrey countryside, here are some pictures of things happening around and about the build this week.

If I haven’t mentioned Rachel before, I’m really happy to finally mention her now. She’s helping with the interior design part of the project, with goddess-like patience, and at the moment it’s all about blinds and curtains. My good friend Lou paid us a visit on Friday and kindly helped me out (read: got roped in…) to measure each and every one. We counted 36 windows that need separate coverings. And there’s a long lead time on these, and as we’ll be moving in around the summer solstice (we’re at 51 degrees latitude up here in the south of England, so it’s very light, very early), it’s good to put these in the important and slightly-urgent box. I’ve made a list of priorities for these. I think we’ll be open to the world for a while if only for cost! At least the lane isn’t exactly the M25 for traffic …. Cardboard is underrated as a window dressing anyway.