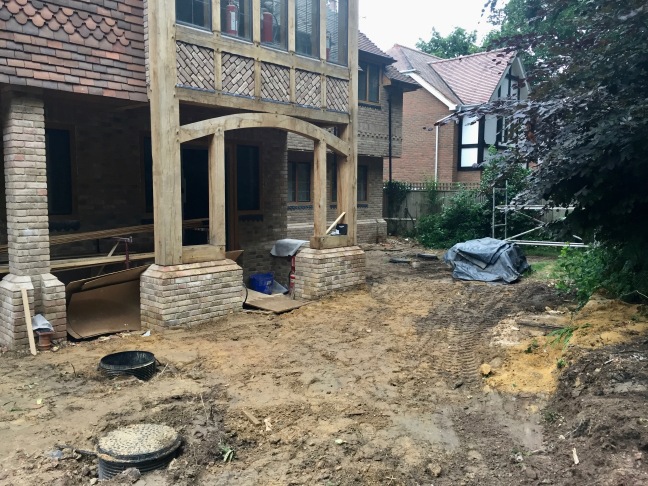 I had a minor surgical procedure a good few years ago which went all a bit pear-shaped in recovery. On speaking to the surgeon, who was a really nice chap despite my setback, it turned out that this particular complication was a one in a bijillion type of thing to happen. Really rare, definitely unexpected. He said then that in all his work, this sort of thing happened less than 1% of the time. But he also understood that despite the odds, it was still 100% of my experience. That’s a lot of responsibility to carry around as a person and a doctor. To his credit, he saw the whole thing through really well, all the while being proactive and keeping positive in analysing the problem, firmly believing that a good solution would gradually emerge.  His attitude turned out to be pretty infectious (no pun intended) and a good learning experience in retrospect.

So, here we are in the midst of another less-than-1% experience. At least, I hope for the building industry it is! No one is happy about it, but onward we go, getting past the worst part which is seeing the nest we’ve built our family upended once again. Demolition was bad enough. I’m upset, but curiously not devastated at the damage done by the flood. It’s not seeing the tangible building wrecked that is gutting, it can and will be mended, it will just take about four more months. It’s more the emotional side that’s galling and the general disappointment that can’t be repaired in any speed but has to be ignored now and eventually left to percolate and dissipate over time.

We started this project with the family in mind, and the goal was to get this house to work effectively for all of us. Rather than have the nice shiny efficient home we’ve worked so hard for, the family is now shoe-horned into our third rental that the kids don’t feel a part of. It’s just like camping, kids, just with better plumbing!, says their ditzy mum. It must be very unnerving as a teenager to have your space dismantled and your parents all distracted 24/7. It seems like this project has taken ages to me (it has by anybody’s standards), but for a bit of perspective, we’ve been at this for a sixth of my youngest’s life, so it must seem horribly normal to her, and that’s not right. I suppose it will make them resilient in the end, but inwardly, I look to my surgeon from before for inspiration and try to be proactive and positive for the kids.

Keeping a smile on is taxing, but we’re quite upfront with the kids about what’s going on–there are no secrets or glossing-over of facts. We’re probably a little too free and easy with opinions around the dinner table, but as this project has eclipsed most of our social life, the build is kind of all we talk about now. It’s easy to be glib and remind them to appreciate that we’re fortunate to have the capacity to put a roof over our heads and food on the table. But this level of subsistence isn’t what we signed up for, in fact what we signed up for is completely the opposite. We tried to ensure that by having loads of tiers of management in place and work cross-checked by a host of professionals, that this sort of disaster would be avoided. In years to come, will I appreciate the house more because the journey has been more arduous? Will we chuckle ruefully as we look back on today’s drama? Or we will feel like just another couple of middle class ya-hoos getting too big for their boots and wading into seas where they shouldn’t be swimming in the first place? Whatever it is, there is no point having a moan, but it’s bloody hard to look at the lovely ruined walls and ceilings and not feel a little robbed that we were so close to living in it.

As a rule, I haven’t shouted anyone out in either a positive or negative way, just because I feel that this blog should be more a story where the House is the central character, and no one wants to read about my dirty laundry. But I feel compelled to give Andy Bald of Removals In Action five virtual stars for being completely awesome. Kevin, Kesta, Shaun, Simon and everyone on his team were total gentlemen and will have moved us five times when all this is said and done. This week the gang worked solidly for days moving us back and forth from rental to storage to another rental with stops to our friend’s house and to the new house to leave some logs in the garden. They’ve put up with me being emotional, 35° temperatures, and a constantly changing gameplan. Thanks, guys…. you’re incredible.

Equally as steady is Warren the Milky 07889 141395. Having milk delivered is a special treat and a cultural phenomenon that I’ve had the pleasure of supporting since I moved to the UK in ’91. Despite our recent vagabond existence, Warren has worked hard to keep the supply consistent for no benefit to himself. When we moved outside his patch into the first rental he found a colleague to continue our delivery seamlessly. It was a pleasure to move back near the house in the second rental and have him resume the service himself. Now, with this short term rental, he’s not only gone and found another colleague to deliver, but he’s given us his good wishes and looks forward to seeing us back in our old neighbourhood soon. Seems a completely unrelated thing to the house-build this whole milk thing, but he’s been delivering to the house for over 15 years plus the two we’ve been out, so it’s kind of a long-term relationship, and one that’s slightly odd because it’s all so ninja–I hardly ever see him! Thanks, Warren.

I apologise for leaving last week off the blog; in the midst of finding new digs and moving into them and it all feeling a bit chaotic. This week is better and we’ve found a path to tread again. The insurers have taken over the Drying Out Process which they say could take anywhere from 0 to 28 days. There are damp reports, forensic assessments, dehumidifiers, environmental teams and all sorts of experts introduced to this project and taking a look this week. Some damage is making itself evident a couple of weeks post-deluge as the underlying structure starts to dry, and even I can see these bits.

To catalogue a few of the areas as they’ve changed in the past fortnight….

But work continues, and although we were planning on moving in, I can’t really say that it was to a complete house anyway. We’d agreed with Tim that work would continue once we were in, and some important bits remained outstanding. Like the 1.25″ diameter water supply which was installed this week. The old pipes were lead, and the water company has a scheme for replacement (which is a little known fact), and they came to replace the house’s supply for free–hooray!

It turns out the supply runs alongside the road between it and the ditch, so there was no kango-ing of tarmac and far less fuss than expected. Phew

The Swedish-sauna oak soffits on the first-floor overhang went in all along the front and west side of the building. It’s all bright and sparkly now with Clive’s double coats of Osmo oil, which looks a little jarring next to the structural oak that’s been there for months, but it should grey out like the rest of building in time. Spencer will be back to install a lead strip around the west overhang so it’s completely watertight. 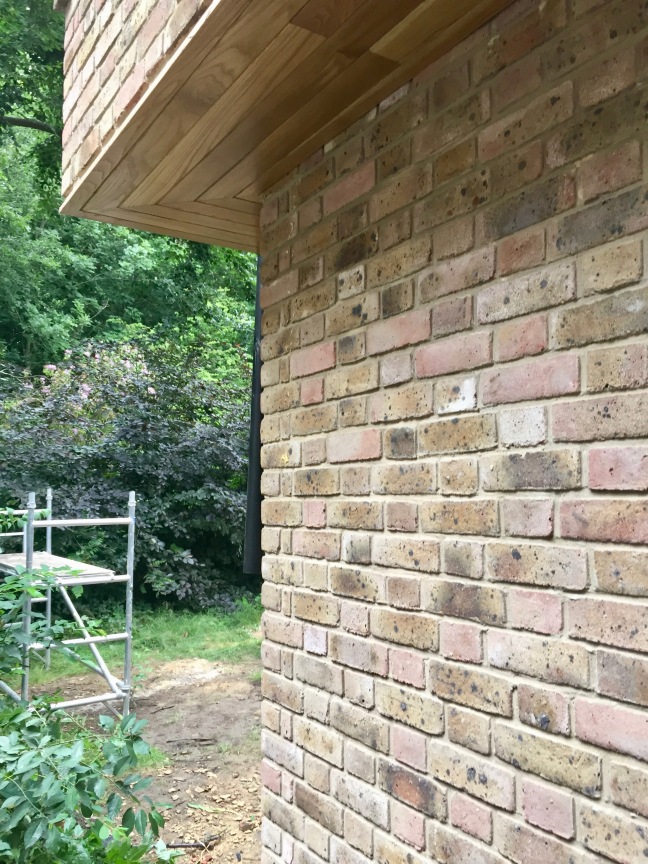 Shower screens went in and niche lighting is on. We’ve had a little trouble with the screen for the girls’ bathroom–it’s got a dippy kink in the wall which prevents fitting the screen flush with the edge of the tray, and it’s just plain too long leaving a slim 560 mm gap to get into the shower. We can’t do anything about the placement of the glass, but we can adjust it’s length. The catch is that the screen is made of special safety glass so it can’t simply be trimmed onsite. These things are jolly expensive, so it takes some nerve to say it’s not right. We’ve asked for a price on replacing it at this stage, and we’ll make a decision whether to change it or not depending on how astronomical it is.

Lots has happened on the outside of the house in the past few weeks.

The electricians will re-attend after the driveway is complete. There’s a day or so of work to put the car charging point in, wire up the coach light and run all the garden spots out to their respective beds. But for now, the wires will be left all coiled up on the side of the garage. Some will be on timers in the garage and others will be switched from the front door which is exactly like we had it in the old house.

The oak support for the garage overhang was mortared in with the rest of paving slabs. This post replaced the very large brick pier that was built first and then demolished when we discovered it left no room to move around it. The edges of the post are really square, and we’ve got to decide whether to chamfer off the corners–what do you think?

This kind of finishing work would have carried on regardless of the flood, and would have been happening even if we had moved in. The builders have been part of our lives for 65 weeks, and the house is pretty dang big compared to what we’ve been living in the past two years, so I’m sure we could have fit in the odd chippie or electrician during the move. But fortunately for them, they’ve had a chance to work unencumbered, and they’ll soon be clearing off to hand over to the environmental guys as part of the insurer’s package until it’s dry.

Pain is a funny thing. It gradually fades, and the weird bit is that you don’t notice it’s gone. I hardly think about my surgeon any more, but all sorts of thoughts have come to the fore recently. One day, this trauma won’t burn so bright, the technicolour will dim, and things will calm down. Looking forward to it.