My last post turned into a bit of a rant, so with this one I’ll do a complete 180 and focus on the really good changes in the build.

One of my pieces of advice for anyone starting a project like this is to plan the kitchen and the fireplace first. There are soooo many decisions that need to be made from soooo many trades that it’s best to coordinate a single plan before anyone arrives onsite with their spanners. The kitchen is a no-brainer for planning; with half a bijillion kitchen shops on the high street it’s one of Those Fun Things to do with a huge project like this.

But the fireplace has just as many trades involved if not more. We made the decision early on to have the face sit flush with the wall and the chimney sit proud of the house.

And we decided that the fuel would be gas. Neither of these stuck, and we now have a false chimney breast with a wood burning stove. Marvellous. The design process has taken literally months, and I have managed to piss off my whole team, including my darling husband, so much with indecision and general questions that we removed it from the build and made it be a client direct package. Again, marvellous, but at least I’ve now got just me to please with no deadlines apart from those I set myself. The next deadline is Christmas, three months since moving in, and even that looks dicey.

We wanted a grand statement, more like a piece of art than just a hole-in-the-wall modern fire. Clinton has always liked CorTen steel, so Steve from Bradley Stoves ,who is doing the installation, recommended a guy called Toby to fabricate the steel cladding. Toby is doing another steel cladding job for Steve, and he runs Arc Fab Sussex in Lewes. Toby’s specialties lie in Big Things like narrow boats, railings, and bridges. He is also a trained artist so likes doing “little” jobs like ours. This “small” piece of steel will be 3 mm thick, 2.6 m high and 2.1 wide with cuts, curves, and supports to house the stove and the TV. Anyway, it was a pleasure meeting him and seeing the site, and now we’ve welcomed Clive the draughtsman on board to measure up so we can have it made.

But I’m getting ahead of myself. The stove has sat forlorn, half-installed by Steve’s gang for months while I got my act together coordinating the cladding. The family and I did some final measurements to make sure we were set on the dimensions before Steve’s crowd came up to build out the final interior of the chimney breast.

As well as building the skeleton for the chimney breast and cladding it in fibreboar, the guys also brought up the lovely piece of 30 mm thick Autumn Brown granite that we chose in the summer, now cut to size and all ready to fit. And because it’s St Anne’s and nothing ever goes quite to plan, they gingerly lifted it out of the van, and it broke into two pieces in their hands. Back in the van it went. Of course, the yard they got it from doesn’t have another piece big enough, so I spent a couple of harried days racing round Surrey finding a replacement match. Luckily, I found one in Hazelemere, and I’m waiting on confirmation of the final dims before committing to a size in the order.

Next up is drafting the final dimensions for the steel, fabricating it, weathering it, and installing. Clive is the draughtsman and does the drawings for Toby, so he drove up early one morning to Measure. This is no small undertaking as he takes on board all the risk if the beast arrives onsite and doesn’t fit (actually, if this happens we’ll probably end up rebuilding the innards). He’s a lovely chap who used to be a blacksmith in nearby Bookham. He’s got more involved in the drawing side of things recently but he still keeps his hand in the Making Process by silversmithing. Not so great for his wife who doesn’t wear jewellery he says, but fabulous for his daughter. Anyway, lasers at the ready, and he’s gone away to draw plans and liaise with Toby. If Steve can give us an install date by the time it’s built, the whole thing should be done by Christmas with any luck!

Other things brewing are fitting out the study with its desk and cupboards. We’ve got Barry onboard, and he’s been very patient with us while we work out the finances. We’ve got a simple idea, and it’s just a matter of pressing the go button.

Nisi installed the CCTV cameras a couple of weeks ago. After the wire-debacle, we’ve got some natty little grey cameras in three places all linked up to a DVR in the data cabinet.

They’re IR too, so we can track foxes scuttling around at night as well as any miscreants lurking in the shadows.

The garden has totally taken over in the three years we’ve been out. All those lovely plants I tended for all those years, and all that awful lawn that turned to moss and we cursed over, are all no more. I have only ever once hired a professional to help out with any garden, during one spring when I was vastly pregnant with one kid or other and couldn’t get near the ground much less have any stamina to actually do anything horticulturally useful. But Nicola’s plan required the A-Team of landscape gardeners, so we’ve invited Mark and his gang on board to do the job. A few months back I put out a request for recommendations on Facebook, and almost everyone I know wholeheartedly recommended Mark. So we’re lucky to have him on board with Max, Duncan, Sam, and sometimes Wes & others, and they’re really cracking right on.

After clearing the site, they brought in 60 tonnes of soil in stages. Robbie the driver got to know the lane really well.

It’s not quite accurate to call the front a “knot garden” as it’s more like a few squares with some defined borders. We’re using steel edges to delineate the beds from the path, and the path will be laid in National Trust-esque Breedon Stone. This is a self-binding aggregate that’s more like a path and less like pea single. 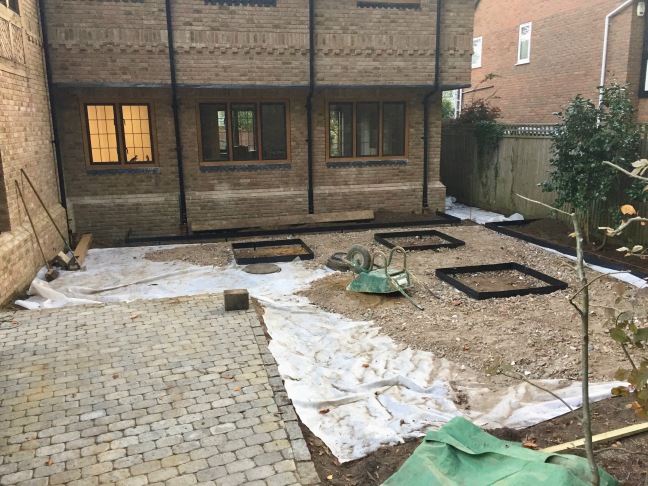 We originally wanted a standard plant like a bay or a holly in each box, all lit up with fancy spots. But since Nicola has drawn this up, I’ve discovered Anthony Paul Landscapes on Max’s recommendation, and he does some lovely things including a hydrangea set in clipped box. So we’ve decided to blatantly copy that instead. Fewer lights = less cash required = fabulous.

One of the reasons we did the whole build in the first place was to re-site the garage in to a more normal part of the house, i.e. the front, and have the sunniest spot as a patio, i.e. the back. It is so lovely to finally see it come to fruition as a space where we can hang out rather than use as a parking space to bake a car or two in the summer sun.

Type 1 scalpings were next, and lovely new soil to the beds. The manhole covers were changed to ones that will have Breedon in them so they’ll disappear more.

Max laid the paving so quick that I missed taking photos of it. The yellow Tracpipe is the gas for the fire-pit. Now that we know how long to cut it, we’ve got to get the plumbers back to do the gas work. I’ll try to book them in at the same time to cut the pipe install the whole fire pit thing all at once–saves two call-out charges.

Pointing and bed prep will finish next week, then we can concentrate on planting. I’m due to go with Mark to choose a paperbark maple as a feature tree, and Nicola had Himalayan birch, coral bark maples and fruit trees in the mix too. There’s also a big hedge to plant. There will be a lot going on in the coming months, and this will happen in dribs and drabs when Mark’s got some time. We’re in no rush, especially since we’re not allowed to walk on the new turf until the Spring!